You are here: Home / family / Trust God’s timing and plans! He is working in our lives whether we like it or not!

I’ve come to realize something.

Sometimes God lets us go through certain things so that we will be strong enough to handle the next part.

In the past two years:

I’ve lost a baby due to an ectopic pregnancy and emergency surgery.

Had a 30+ foot tree fall on me. My two children and the boy I was babysitting witnessed it and barely missed it themselves.

Had a stressful beginning to my pregnancy that brought me my littlest.

Went through my divorce.

Each of those were tragedies in my life that I often wondered why I had to go through them. I had already lost a baby before my big kids were born. The ectopic pregnancy was very unexpected (I had the mirena!). It was a couple weeks of constant worry and stress, blood tests, and hoping and praying for a miracle. It ended in me be rushed in to emergency surgery where I lost a tube along with my baby. I had never been so scared in my life. I had this awful feeling I was going to die and not make it back to my husband and two kids.

It was the first full week of summer break. I was babysitting a friend’s boy for the summer. I took him and my big kids outside to play. I planned to do something on my computer while they played. Before I did, I was alerted to the fact that some neighbor dog had pooped in our yard. Again. So I got rid of that and put the shovel away by the garage. I still had a table near my garage from a party and I considered sitting there in the shade versus the deck. I stopped for a second and looked at our old rotting tree.

Then, when I was walking away it fell. 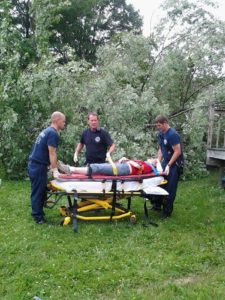 After the initial screams of fear and pain, I crawled out from under it and accounted for 3 kids. My son was just RIGHT THERE where the tree fell.

I ended up leaving the hospital with *just* a concussion, cuts all over and bruises. I wasn’t able to use my hand for quite some time. The strength didn’t come back for at least six months. My concussion lasted ALL summer long.

It really completely messed up my summer and the fun I could have had with my kids.

In December I discovered I was pregnant with my littlest. On Christmas Eve, I found out in an out of state hospital that I had a blood clot. Months later it resolved and I thought things were settling down in my life.

Then, my divorce happened.

I often wondered WHY did *I* have to go through all those things? Then one day I realized that without the struggles of all of those previous things, I would NOT have made it through my divorce as well as I did. I also realized that if I had been pregnant when the tree fell on me, it could have been even worse.

That just shows me that God has a plan for everything. Sometimes it takes tragedies to be able to get through your world crashing down around you.

You can get through anything life throws at you. Don’t give up!